Hi guys, just made an account here so I thought i’d introduce myself and my car
Its a 1992 GTO, NA AWD manual.

Picked it up back in february and have been working on little bits and bobs where I can whilst i’m not at uni.

(before it was washed)

It had been parked up in the previous owners garage for nearly ten years, so far i’ve done the timing belt and water pump, changed the broken steering column, and i’m currently in the process of replacing the leaking exhaust front pipe.

Things i’ll hopefully soon be getting around to are rebuilding the front calipers which are currently being powder coated, and replacing the transfer case output seal which is leaking oil.

This is my first project car and second ever car, working on cars isn’t something i’m overly familiar with so I suppose this is me jumping in at the deep end lol.

It otherwise looks to be in reasonable condition, the paint isn’t pristine but there isn’t a spot of rust anywhere on the actual unibody that I can see, so hopefully it will be a nice car when its finished.

Here’s a look at what the old steering column looked like.
Car had been subjected to attempted theft in the past and the damage is rather telling. An attempt to break the steering lock perhaps? 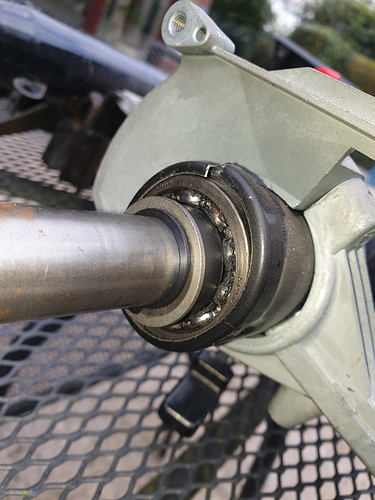 and the wiper and indicator stalks were sitting higher/lower than they were supposed to as they were twisted around with it.

Was a right mess but sorted now.