Bought a GTO yesterday, so another newbie for you

I’d thought to sign up with the forum and say hello, having just bought a 1991 GTO (non-turbo, auto alas) that I was hoping to use as my daily car. It does however need a lot of work and this I could tell from driving it back home yesterday, as it was pretty much a blind purchase (yes, I know) and so far I still haven’t had a chance to properly inspect it. It overheated on the way back, so I had to keep pulling over. I could hear a hissing from the “new” water pump, as the last owner replaced it along with a timing belt kit, so there’s job number one. Does anyone know if I have to remove the engine mount and timing belt to access the pumps bolts please? I’m just going to check the torque first. It also lost oil pressure stopping at lights and in London traffic. I knocked it into neutral when idle, but the oil light stayed on until it’s over 1000 RPM. It’s also very slow, not just for a non turbo. I drive hundreds of cars for a living and this is not right. I can’t tell if it’s the engine that has lost power or if it’s drivetrain or brakes. I suspect the latter as it doesn’t creep in gear, and when you touch the throttle the car lurches.
Anyway, hopefully I’m in the right place to source a few parts and will no doubt get to drool over some pics of some of your high-end show cars, as well as see other works-in-progress. I live a little West of Oxford.

Thanks, and I must say this is a very presentable website. Rick.

Sorry to hear of your issues already

We are predominantly called the GTO club as that was the majority of cars the founding members owned when starting up , the 3000 was a rare beastie back then

Sounds like you have a few issues with the car , the n/a auto isn’t exactly going to set the world on fire performance wise but it should still be moderately spritely , is it shifting into first or staying in limp mode on the gearbox .

Sounds like you have bought a car with multiple issues , though all of them are solvable and the majority have been covered many times within the vast technical section of the forum that is accessible to full members

Hi @ricky, welcome along, the ride may be bumpy to start but will smooth out in the end.

Thanks Craig. Back in the 90’s, a local dealership used to import GTOs, so I’ve probably seen more imports than Mitsubishi’s own UK spec.

The gears shift, but I don’t have anything to indicate a limp mode. Would it pull away in 2nd if so? It does take ages to build up speed from a stand or slow speed and it’s better top end (I couldn’t push it with the water leak and other unknowns). I thought it’s weird how you have to use overdrive on a motorway as the revs seem very high in the normal gearing bands and drops significantly when I press the o/d switch; like going from 4th to 6th in a manual.

Cheers, I’ll look to join if this car will be the “keeper” I’m a hoping for.

WOW! I’ve just seen the club T-Shirt–I’m going to have to join if I can get one of them!

Hi @ricky, if you join you get the benefit of the search button and all the access to the huge technical knowledge base. Any problems may have been discussed many times and the answer is usually there. Don’t know anything about the auto ones, but check your oil, make sure its a nice clean colour, if its dark, problems may be on the way, if its really dark, change and see what happens. Change the filter too.

welcome Ricky, always good to see a picture if you have one. Hang in there, shame to have problems early on but if you get it right, they are great cars to own and worth looking after

Welcome to GTOUK Ricky, upload a couple of pictures perhaps someone will recognize the car !

Welcome to the club Ricky, I’m pretty good with the autos now, give me a shout if you need help, there’s plenty of technical help in here for the auto GTO’s - just needs some searching sometimes

Thanks guys. I’ve got a couple of pics on my phone, but can’t get logged in on here on it for some reason (I’m using my laptop a.t.m.)

Cheers, Robbie. If you know of any mods that can improve the auto, I’d love to hear them. Something is making it a little delayed when you select a gear from neutral–it’s only slight, and at 220k kilometres I guess it’s expected. The last owner said he did a “fluid change” on the box, but I might just buy a new filter, gasket and decent fluid, in case it has the wrong grade/type in there.

The fact it doesn’t creep in gear is leading me to believe it’s something else though.

(please advise If I’m supposed to discuss this after joining in the members only area and I’ll edit it out)
I’m after a pair of timing belt covers if anyone has any to sell? It’s the front and rear uppers.
My drivers’ seat and steering wheel is knackered, so I can either replace with stock, but I’d love some aftermarket replacements.

Somethings I’m looking to remove. Not quite superleggera style, but will help to tidy the tired look:-

The car still has it’s cat, I’ll probably de-cat it since it’s a '91 provided it doesn’t throw a CEL (there’s a lamda sensor behind it).
I’m not sure if it has an EGR which I might “delete” as they call it these days.
The vacuum lines near the throttle body look a mess and I’m not sure if one just stuck on a bolt is used to supply air at idle, but I’m sure some can go or be routed better.
There are two original “GTO” LED strips in the rear quarter windows. I was told they’re rare and only an option on Jap cars for the first two years.
The stereo is an after market double din with a touch screen. I might just make a blanking plate until I decide to fit something simpler.
I’ll probably remove the ariel and rear wash/wiper if I can blank them, as they’re faulty and not worth replacing; I’ll have a spare bottle and motor if anyone needs 'em.

The gto rear window things are a nice touch, i bought some recently. If you find put how they are wired in let me know, i plan to have mine added to the sidelights

I the genuine GTO illuminated plastics

can’t get up the unit to take a picture of the wiring though !

I’ve connected an extended wire from the led strip to the side light wire on the harness behind the boot trim panels . 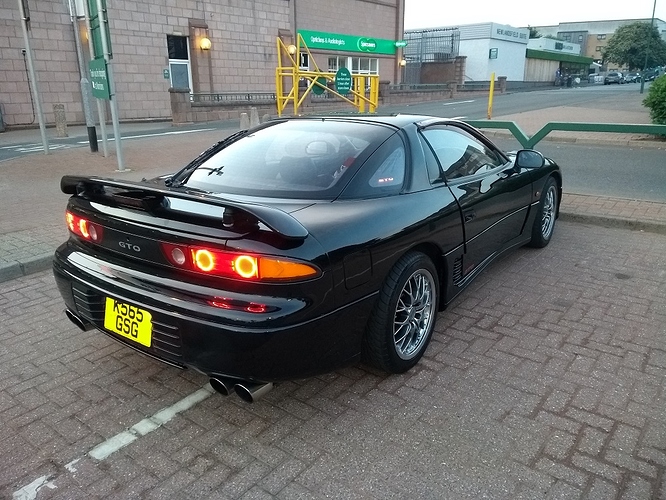 If they were a factory option on early cars wouldnt that mean i have connectors in my loom already for them to attach?

Talking of the back pannel, taking mine off the other week i found a plug not in use. You know what it is for? 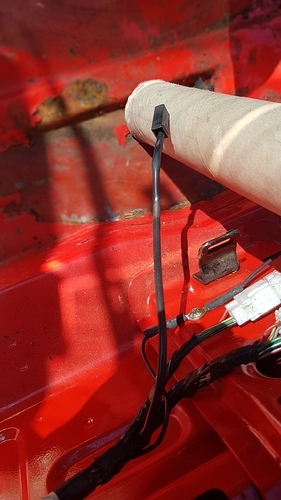 Not sure if this is for the leds, I got mine from a member few years back without a male connector on them so I couldn’t tell if the one in the loom is for that.

I can’t exactly tell from the picture whereabouts this plug is but is it not the plug for the active exhaust perhaps ?

Below the boot lock, comes along the light loom and drops out.

The exhaust motor is all in the corner and plugged in. This is about 12" along from there